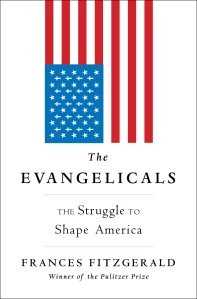 Perhaps not since Newsweek declared 1976 the Year of the Evangelical has so much been written and argued about evangelicals until this year.  The presidential victory of Donald Trump and his huge support by evangelicals has put the topic back in the spotlight.  So, when I heard that Francis Fitzgerald was writing The Evangelicals:  The Struggle to Shape America, I was looking forward to reading her book.  Coming in at over 700 pages (with notes and indexes) this is what you would expect from an author who has won the Pulitzer Prize.  The book is timely.  Stretching all the way from the Great Awakening to 2016, is narrates the shaping of America both theologically and politically.

The book is not about collegiate ministry, but by looking at the interaction of evangelicals and culture throughout American history, one can see how evangelical thought (or lack of it) shaped or reacted to collegiate life.  The 1960s comes readily to mind to most people, but the material dealing with the 1920s is also informative.  I enjoyed filling in the cracks of the 30s through the 50s, but frankly got tired of reliving the ups and downs of the Religious Right of the 80s and 90s (I lived through it).  However, for those too young to remember the high tide of the Moral Majority, it is a great recap of where many evangelicals were placing their stock, especially politically.  If a young Christian does not understand the “reclaim Christian America” mindset by many evangelicals, this book helps put it in perspective.

This book would be a great read to brush up on evangelical movements in the US, how evangelicals have dealt with a culture becoming more secular, and what lessons evangelicals could learn for the future.

For part two of the No Campus Left Podcast click here

With the rapid realization by Christians that American culture is more like an adversary than an ally, church leaders, writers, pastors, and lay people within orthodox Christianity have begun to ask where does the American church go from here.  Though some like Russel Moore are more optimistic about “keeping Christianity strange”, others are more skeptical about the church’s days ahead.  One of those who remains skeptical is lay person, writer, and blogger Rod Dreher.  Known for his blog at The American Conservative, and his book How Dante Saved Can Save Your Life, Mr. Dreher believes that the church will face a continuing hostile culture which will force her to entrench for decades to survive the coming battle.  He takes the title for his book, as well as the concept for the church’s health, from St. Benedict of Nursia (480 AD-547 AD). In creating a rule to help the Church, Benedict also set in motion systems that would create institutions to preserve Western civilization during the coming Dark Ages. Thus the title of the book:  Mr. Dreher sees a coming Dark Age for the American church.

According to Mr. Dreher, he is not advocating “running to the hills to hide,” but a focus on ingraining a Christ-centered mentality in the church.  To do this, he contends that there must be some withdrawal from mainstream culture which is quickly moving away, if not against, the Church.  By withdrawing, yet being a faith presence within culture, he contends that the Church will reemerge at some future time to lead the culture back to Christ.  He is talking  a long view of the cycles of Christianity.  I personally think he is on to something that we Christians need to really ponder.

In a year when many evangelicals seemed to think that a Trump presidency would roll back the hands of the cultural clock, The Benedict Option will be an interesting, and perhaps, needed tonic to purge an overly confident evangelical church. Though I respect Mr. Dreher and appreciate his writings, I don’t know if I will agree with everything that he will say in  his book.  But I  do know that it will be one of the books that every serious-thinking Christian should be familiar with going forward.  I have already pre-ordered my copy.