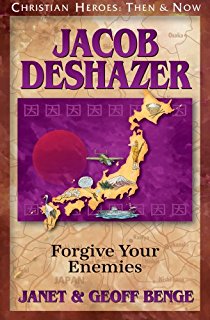 This December 7th as many in the United States and around the world mark the 75th anniversary of the Japanese attack on Pearl Harbor, there are many stories of heroic actions by servicemen and citizens that could be remembered. However, I would like to point to one that shows how God can take bitter enemies and do wonders.  If you are looking for a story of redemption coming out of a tragic event this is it.

After the initial shock of the Japanese attack on Pearl Harbor, the United States launched a surprise attack on Japan in retaliation.  The men who flew in the planes attacking Japan would not have enough fuel to return, and so had to bail out or land in China.  One of the men who bailed out after bombing Japan was Jacob Deshazer.  Jacob was quickly captured by the Japanese army and held as a POW for 40 months.   Jacob was beaten, starved, and put in a camp that seemed like the pit of Hell.  But after almost two years in captivity, Jacob was able to read a few books, including the Bible.  Jacob read the Bible over and over during that time.  Though held in a prison, he found salvation when reading Romans 10:9.  Jacob confessed Christ, found hope, and became a new man.

Though Jacob was well-known after the war as a survivor of the Doolittle raid and a famous POW, his most amazing action was forgiving those who imprisoned him and returning to Japan as a missionary after the war.  He traveled the country speaking to large crowds and telling his story and preaching the Gospel.

Fuchida’s picture at Pearl Harbor across from the Arizona

Perhaps, however, it was his tract I Was a Prisoner of Japan, that won his most well-known convert:  Captain Mitsuo Fuchida, leader of the squadrons which attacked Pearl Harbor on Dec. 7th, 1941.  After becoming a Christian, Captain Fuchida would go on to become an evangelist in Japan reaching his own countrymen.  At times Jacob and Mitsuo would appear on the same stage preaching to Japanese crowds amazed at this turn of events.

Only God could take a man who had every natural right to hate the Japanese and turn him into a missionary who could forgive his enemies.

If you are wondering what this has to do with campus ministry, I guess you could say it has nothing to do with it; but on the other hand you could say it has everything to do with it.  Sharing the Gospel on campus is often about crossing lines to “those people” who don’t always like us, who are different from us, or who we do not like.  But if we are going to reach the campus with the Gospel, we will need to see “hostile” areas as the fruit for the future Church.  No one thought on December 7, 1941 that Mitsuo Fuchida would one day become a Christian evangelist.  But God knew.

Your students are missionaries to the whole campus.  Send them out to find the least expected future evangelist.

If you would like to read more about Jacob Deshazer check out this book from YWAM publishing.  Jacob Deshazer: Forgive Your Enemies

One thought on “Jacob Deshazer: A Great Forgiver”